The biggest challenge with Clara’s stoma has been trying to protect her skin.

Because Clara only has a small amount of gut remaining, it was a fine balance between using enough gut to make a raised stoma and saving as much as possible for reconnection.

An ileostomy bag should fit neatly over a stoma, stuck to the skin, to contain most of the intestinal waste. Clara’s stoma is flush with her skin, to save bowel, so there’s no clear lip to contain within the ileostomy pouch. As a result, waste can seep around the hole in the bag and then underneath it, damaging her skin and causing the bag to lift.

More recently, Clara has been getting through at least a few ileostomy bags a day. Ideally, it should only be changed every 24-48 hours to prevent the skin being irritated with the application and removal of adhesive. But everytime her stoma leaked, the bag partly lifted and once it’s been compromised it has to be replaced.

Yesterday we had repeated ileostomy issues. Clara was on her fifth bag by lunchtime. Two nurses, one stoma nurse, one play specialist, and I, could not keep her bag secure. We tried different adhesives in banana shapes and doughnut shapes, a drying powder (that makes her skin too dry so the bag doesn’t stick), different layers, various pastes…

We finally thought we had sorted it, so Clara and I ventured out locally on her tpn break to get some more sleepsuits (this girl is growing long ways!). Unfortunately, I checked an hour later and the bag had leaked again. Que – a complete ileostomy bag change in Asda. I’d not done it single handedly before but there was simply no alternative. Luckily, Clara stayed relatively calm and allowed me to go through the process without too much headache.

We knew that this couldn’t go on for months. Clara’s skin around her stoma is just too raw to continue this way.

Her surgeon made the decision to reconnect her in April.

Mr Lee also put another tube into Clara’s small intestine in the hope the majority of waste will go into the tube and down to a bag, similar to the jejunostemy pipe and bag she had before. As she has a stoma now, there’s still an ileostomy bag there to catch any leakage. It’s quite a set up! 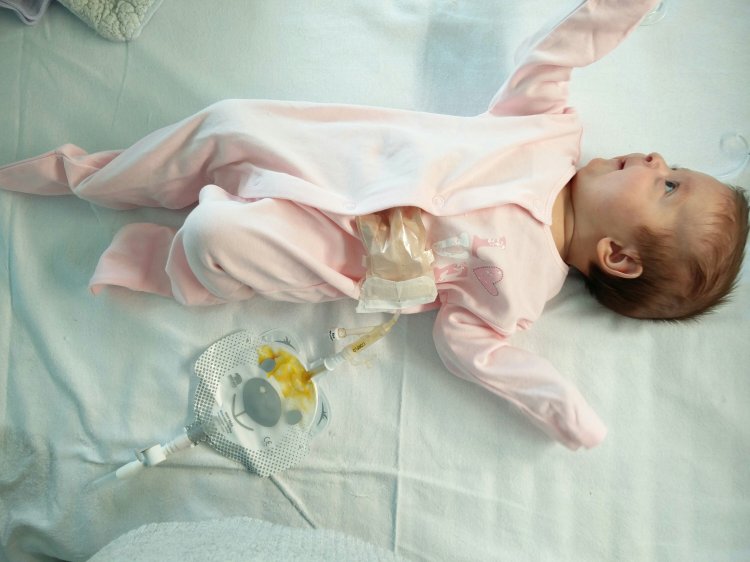 Clara is in between sleepsuit sizes. The smaller size, once washed, shrink to the point where she can’t straighten her legs. So for now, she’s got extra flappy arms and legs.

In preparation for reconnection again, we are upping our ‘recycling’, we’re taking intestinal waste from the stoma and putting it down the mucous fistula to get her colon working again.

The benefits to recycling outweigh the challenges, I’m really glad we’re doing it. The slight challenge is the colon can squeeze the waste either way – and sometimes it comes back up, leaking onto her skin, across her small tummy to the large ileostomy bag, causing the bag to lift.

Last night, after the mucous fistula leaked, four nurses had great fun (!) redressing Clara and her stoma, trying to protect her skin, whilst an angry Clara reminds everyone it’s the middle of the night and all she wants to do is sleep.

Whilst the stoma has caused a lot of fuss for us carers for Clara, she remains her usual cheeky self! After her second set of immunisations yesterday, Clara shouted at Chloe (the nurse who had the lovely job of administering the vaccines) and then proceeded to smile at everyone else.