Monday morning, Clara and I both woke up feeling grand. I even had time for a coffee and a play with Clara before her intravenous infusion was due to end.

It was then our usual routine up: once disconnected from her PN, it was time to go downstairs and get breakfast ready. I decided we might as well try Clara with something a little new – a nectarine. I’d seen them the day before and they looked delicious, I knew she’d love them. And love it she did – I cut a slice for her and peeled the skin off and she sucked heartily away on all the fresh juice. She soon tucked into her banana, clearly enjoying breakfast this morning. 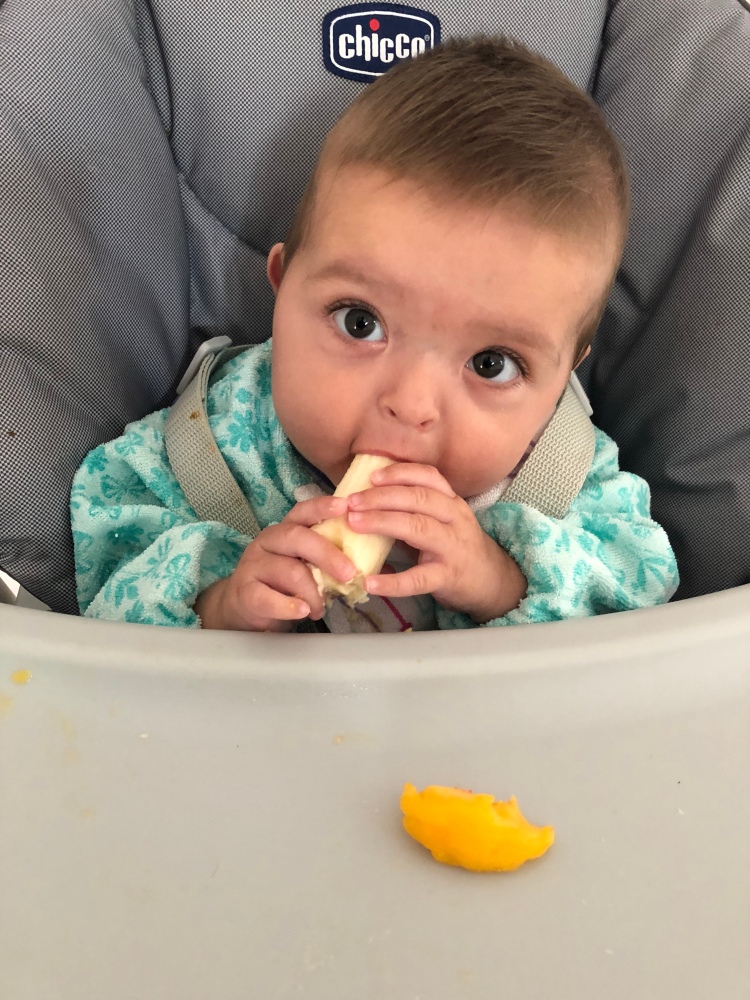 During her breakfast, the usual half a banana and baby porridge made with water, Clara started to get a little tired and was blocking food with her tongue. Nothing out of the ordinary but she normally eats a bit more then she had. Perhaps all that early playing had made her tired, just a little earlier than her usual nap. I thought nothing of it and put her to bed and kept the baby monitor on and with me.

It wasn’t until she woke up that everything changed.

The best way to describe her behaviour was like an abandoned lonely kitten mewing in the grass verge. Soft whimpers, not much energy, and just curled up. The only difference is Clara had to be curled up on me, laying her down made her cry.

Her forehead felt hot to touch so, for the first time since we have been home, I checked her temperature. 39.6. A fever.

Clara’s Hickman Line means we have to be extra vigilant with temperatures. They’re not as straight forward as just high reading to be treated with some Calpol. After various calls to her Gastro team and Toms Ward, we made our way to A&E. I had even called the GP, who put us on the URGENT call list… but phoned me back helpfully over 3 hours later. (They haven’t yet met Clara due to the excessive wait times – a month for a 12 minute appointment – only someone that knows Clara’s complex and challenging start to life could help in this situation).

I left her on her play mat, and popped into the room next door to quickly grab a clean set of clothes for Clara to throw in my bag. The second I left, Clara threw up a large amount of clear liquid… and there, in the middle of her play mat, was a chunk of pulped nectarine.

I didn’t know she’d taken any nectarine!! She’d just been sucking on it! I didn’t leave her unattended, she didn’t gag or choke, she was full of smiles whilst she had it! Those pesky teeth… they must have pulled some of the nectarine away and she’d swallowed it. But Clara’s tummy disagreed with it. Whether it’s the nectarine itself, or the fact it meant her stomach had to work overtime to try and digest it, I’ll never know. We certainly won’t be rushing back to nectarine any time soon!

We arrived at A&E and simply the mention of the words fever and Hickman line got us seen immediately. We entered paediatric A&E and were assigned to a bed where they immediately got to work checking her vitals. Her heart rate was slightly elevated, her oxygen levels fine, but her temperature was still raised at 38.1.

As time went on, Clara’s temperature kept reducing until it was back to a healthy 36.6. It didn’t go unnoticed this was not long after we had been told we would be kept in overnight for monitoring and blood results and they’d got us a bed on Toms Ward. (Toms isn’t the usual destination for this as it’s a surgical ward but the nurse quite rightly said if we didn’t go there then all of Toms staff would end up coming to see us anyway!). And quite right too, we love our Toms family!

We ended up being inpatients until Tuesday evening.

Clara was given two lots of antibiotics via her Hickman Line, and her first set of blood cultures came back reassuringly negative. We know now they’re still negative after 48 hours which is great. The challenge we have is we can’t take blood via Clara’s Hickman line because it doesn’t draw anything back. We can’t exclude a line infection if we can’t test the line. The inflammation markers in her blood suggest something is going on – we started antibiotics because the levels were at 20 and should have been 0-5. It’s Wednesday and they’ve increased again to 30, despite two antibiotic infusions.

Collectively, Clara’s Hickman line is worrying. It’s only a month old this week (happy birthday mate) but it seems her body is rejecting it. And not just this one, but any one. We have the same problems with this line as we did her original line. Clara doesn’t want her Hickman line anymore. The nectarine induced temperature meant they checked her CRP (blood inflammation levels) – without that, none of this would have come to light.

And it’s on that basis that the A&E trip changed everything.

We have agreed to trial Clara without parental nutrition for a few weeks. If all succeeds, her PN days are over. Her Hickman line will come out. Please, please, pray this works for us.

Over the next couple weeks we will be checking she can maintain a good nutritional balance – ie she can absorb enough from feeding orally and continue to put on weight. Her stools shouldn’t change much, we don’t want any more of them than we already get or it could indicate her feed is flushing through. She needs to eat enough and be able to manage it.

But do you know what?! Of course you do.. she’s got this! She knows what she’s doing! She always has done! That girl has never kept a medial accessory in or on her for longer than she wants it.

She knows she wants this now. When the decision was made to cancel this weeks PN delivery, to not put her back on for the foreseeable future, to treat her like a ‘normal’ baby, she fed the best orally she has ever taken in her entire existence. Clara had 850ml of milk, plus half a banana yesterday. Today she’s on track to hit the 800ml mark again, plus half an avocado, a whole banana, and five small strawberries.

Gone are the days of 2ml, four times a day.

Without that nectarine raising her temperature, this never would have happened.